Your browser (Internet Explorer 7 or lower) is out of date. It has known security flaws and may not display all features of this and other websites. Learn how to update your browser.

The markets of Kashgar

Following on from a previous entry about the grand welcome in Kashgar and knife making I’d like to say a little about a day out at Kashgar’s markets and bazaars. 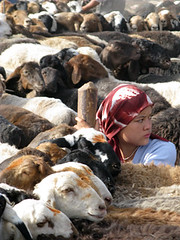 I was up and out early for a shave and a hair cut with some local lads in a barber shop just next to the hotel. When you don’t speak the local language, it is always an interesting experience trying to explain how you’d like to shaved and which clipper setting you’re after for a hair cut – thus avoiding an unwanted skin head.

We took the truck out to the famous Yekshenba livestock market, a Uyghur livestock market on the edge of town. In this part of China (the Uyghur Autonomous Region of Xinjiang – once Eastern Turkestan), the native population are not Chinese, but predominantly Uyghur (with a few Tajik, Uzbek and Kyrgyz thrown into the mix).

I love markets as they are great places to see locals going about their business and you get the chance to see real life rather than just touring the main sites and attractions. Here is a little insight into one of these amazing places…

Yekshenba is where the locals bring their sheep, goats, cows, bulls and camels trade. One camel costs about 3000 Yuan each, well that is what one man advised me when I took an interest in his camel. 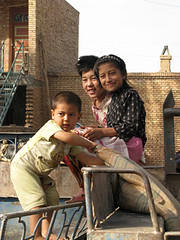 Yekshenba is a heady mix of strange (and also all too familar now – sheep!) smells, sights and sounds.

The sheep with their manicured rears, donkeys being shod, bulls being inspected – shepherds, young and old, all over the place. Boys sharpening blades, a barber (with just a chair and a razor), friendly kids on the back of carts, a family on a tractor with the little boy pretenting to drive it.

Whilst a friend got a shoe repaired by a man with an amazing beard, I bought some water off a guy who said he was studying physics – it is amazing the people you meet quite randomly. In one part of the market another man was selling some kind of ice cream, and as I wandered around, a small flat bed van came by with a cow in the back. A couple of boys were selling melons that were laid out in a huge pile on the ground, and then there was the ‘garlic man’ – a man walking around with a huge string of garlic around his neck trying to sell it to me. 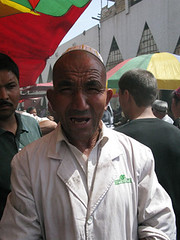 Then I bumped into one of my travel companions, Samir – I had to hand it to Samir (a lawyer back home in Brazil), as he actually bought a sheep!

Obviously, we could not take it with him, so he then had to sell it and, you guessed it, he ended up losing money. He lost 300 Yuan, but what an experience and fantastic way of interacting with the people!

After the livestock market I returned to the city and explored the main market which was amazingly colourful too with so much to take in – the colourful women’s clothing, linen, material, fabrics, young women sewing, the lemon juice seller wheeling his lemon laden cart through the market.

Oh, and the random man in white overalls shouting – I’m still baffled by that one!?

Markets, souqs and bazaars are definately my favourite places to visit when I’m travelling.

Thanks Kelsey… Xinjiang is very interesting part of the world and the Uyghur people are some of nicest I’ve met so far on my travels.

These are some really great photos! Kashgar is one of the places I’d love to stay for a few months.

This site uses Akismet to reduce spam. Learn how your comment data is processed.